Welcome to the 12th Edition of our Corvette Monthly News Summary: The 10-minute Corvette news recap. Every month, we gather the hottest Corvette news and headlines from the previous month to keep you up-to-date on all things Corvette.

This month, we've got highlights from the epic showdown between the Corvette Z06 and the Porsche 911 GT3, a head-to-head comparison of the Z06 with the Lamborghini Huracan Tecnica and the McLaren 765LT Spider, and much more. Whether you're a die-hard Corvette fan or just a car enthusiast looking for the latest news, you won't want to miss this month's summary.

You can use the "Quick Navigation" menu below to jump to the headlines that interest you most. If this is your first time reading, make sure you sign up to our newsletter at the bottom of the page to receive the next Corvette News Summary in your inbox!

As 2022 drew to a close, the Chevrolet Corvette made a splash with a series of exciting events and announcements. The highlight of the year was the much-anticipated drag race between the 911 GT3 and the Z06, which captivated car enthusiasts around the world.

In addition to the race, there was also a comprehensive comparison blog featuring the 2023 Corvette Z06 alongside some of the top supercars on the market. The year ended on a high note with the release of production figures for the Z06 and the leak of design details for the upcoming 2024 Corvette Eray. All in all, it was a thrilling end to the year for the Corvette brand and its fans.

Let's jump into the cockpit and see what happened in the world of Corvettes in December.

In an intense and highly anticipated matchup, the 2023 Chevrolet Corvette Z06 faced off against the 992-gen Porsche 911 GT3 in a drag race to determine the ultimate champion. The 2022 Audi R8 was also part of the competition, but the main focus was on the battle between the Corvette and the Porsche.

When the dust settled, the Z06 emerged as the clear winner, crossing the finish line a full five and a half car lengths ahead of the 911 GT3. The Audi R8 came in a distant third. Watch the whole video below:

Motortrend recently pitted the 2023 Chevrolet Corvette Z06, the 2023 Lamborghini Huracan Tecnica, and the 2022 McLaren 765LT Spider against each other in a supercar comparison.

The article analyzed the acceleration, braking, and turning capabilities of each car, and ultimately crowned the McLaren as the champion. The Corvette Z06 came in second, followed by the Huracan Tecnica in third place.

The article also compares the transmission, weight, and price of each car, and concludes that while the McLaren ultimately comes out on top, the Corvette Z06 offers the best value for its price point.

Emelia Hartford Gets Her Z06

In her recent video, Emelia Hartford, a record-breaking performance builder and driver, excitedly unboxes her brand new 2023 Chevrolet Corvette Z06 in Amplified Orange. This stunning sports car, which cost a hefty $152,015, features a sleek grey interior with white GT2 seats and is the most expensive purchase Harford has ever made.

Interestingly, the dealership left the protective plastic on the paint to preserve it during the required 1,500 miles of track use. This gorgeous Corvette is sure to turn heads on the road and dominate the track. We know she will be whipping up some crazy builds on it!

You can check out the full video below:

Speed Phenom Compares C8 Corvette Z06 and the Racetrack: Who Comes Out on Top?

Despite this, the Z06 is still praised as the perfect driver's car at the end of the comparison. The video, filmed at Auto Club Speedway, delves into the similarities and differences between the two naturally aspirated supercars.

The Corvette Assembly Plant in Bowling Green, Kentucky is continuing production of the 2023 Corvette Stingray and Z06 models.

As of last week, approximately 19,500 regular Stingrays and 1,650 70th Anniversary Stingrays have been built for the 2023 model year, totaling around 21,150 Stingrays.

Production of the Z06 is ramping up, with about 300 units completed so far, including about 36 with the 70th Anniversary package. However, orders for the Z06 with the aero package from the first order cycle in August are reportedly being delayed, with Target Production Weeks (TPWs) being pushed back to February and January.

The 2024 Chevrolet Corvette ERAY has been revealed on the visualizer, offering a first look at the design and new exterior and interior colors for the model. 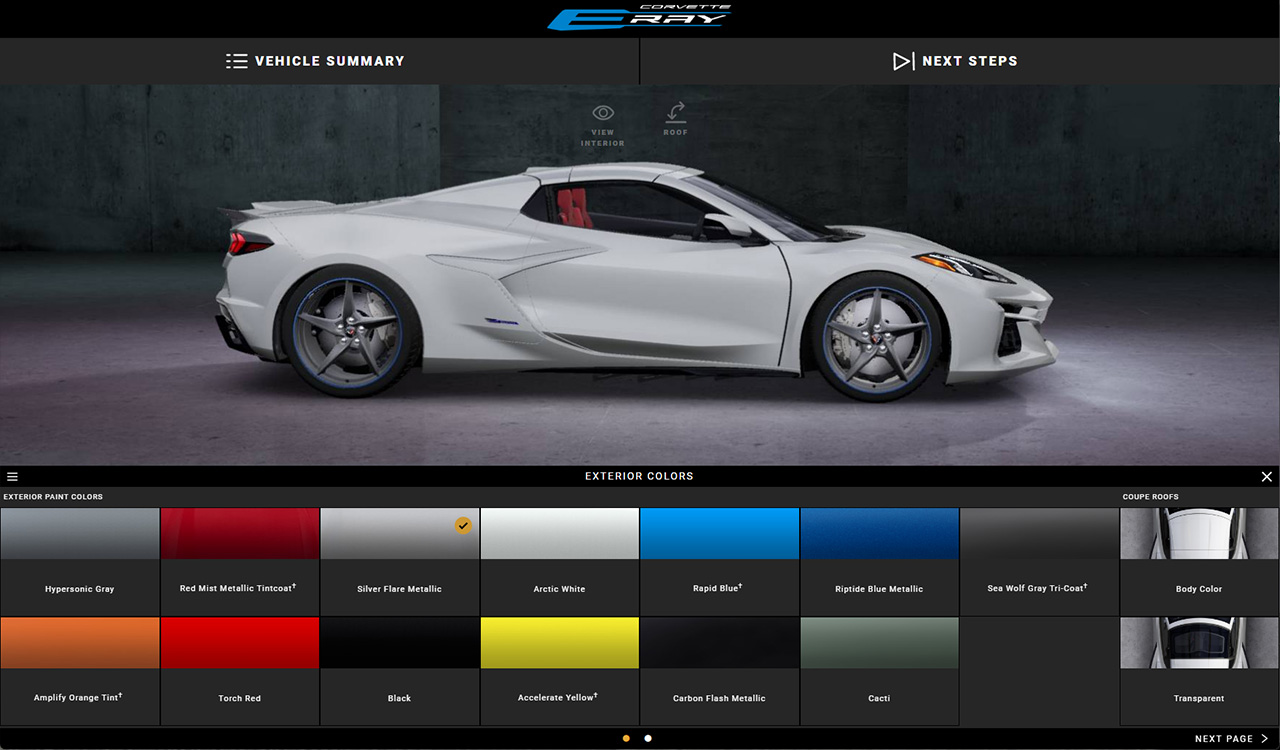 The ERAY is a mid-engine, widebody vehicle powered by the LT2 V8 engine with electric assist motors on the front axles. It will have a ZER Performance Package and offer the option of painted and visible carbon fiber wheels in three designs. The model will have 13 exterior colors, including three new hues, and the option of a Carbon Fiber or Stealth interior trim package.

The visualizer link has been taken down, but Chevrolet stated that more information will be released soon.

The C8 Corvette E-ray was leaked on the Corvette Visualizer on December 2nd.

Chevrolet has added 12 new videos to its Stingray Academy playlist under the title "Accelerated Preparation." These videos cover various operations and settings for the entry-level Stingray model. One video covers the Stingray's vehicle break-in schedule, while another focuses on vehicle maintenance.

What is the Corvette Academy?

The Corvette Academy is a collection of videos produced by Chevrolet that provide information about the mid-engine Corvette. The Academy has two playlists: one dedicated to the Corvette Stingray and the other for the high-performance Z06 model. These videos cover a wide range of topics, from broad overviews of the Corvette to very specific vehicle operations. The Academy is a useful resource for new owners or anyone looking to learn more about their Corvette.

You can watch the videos below:

The Chevrolet Corvette Z06 model will now be available with body-color exterior accents (EFY) according to an update to GM's 2023 Corvette Order Guide. Previously, the Z06 model could only be ordered with carbon flash metallic trim. However, EFY will not be available on black or 70th Anniversary models. 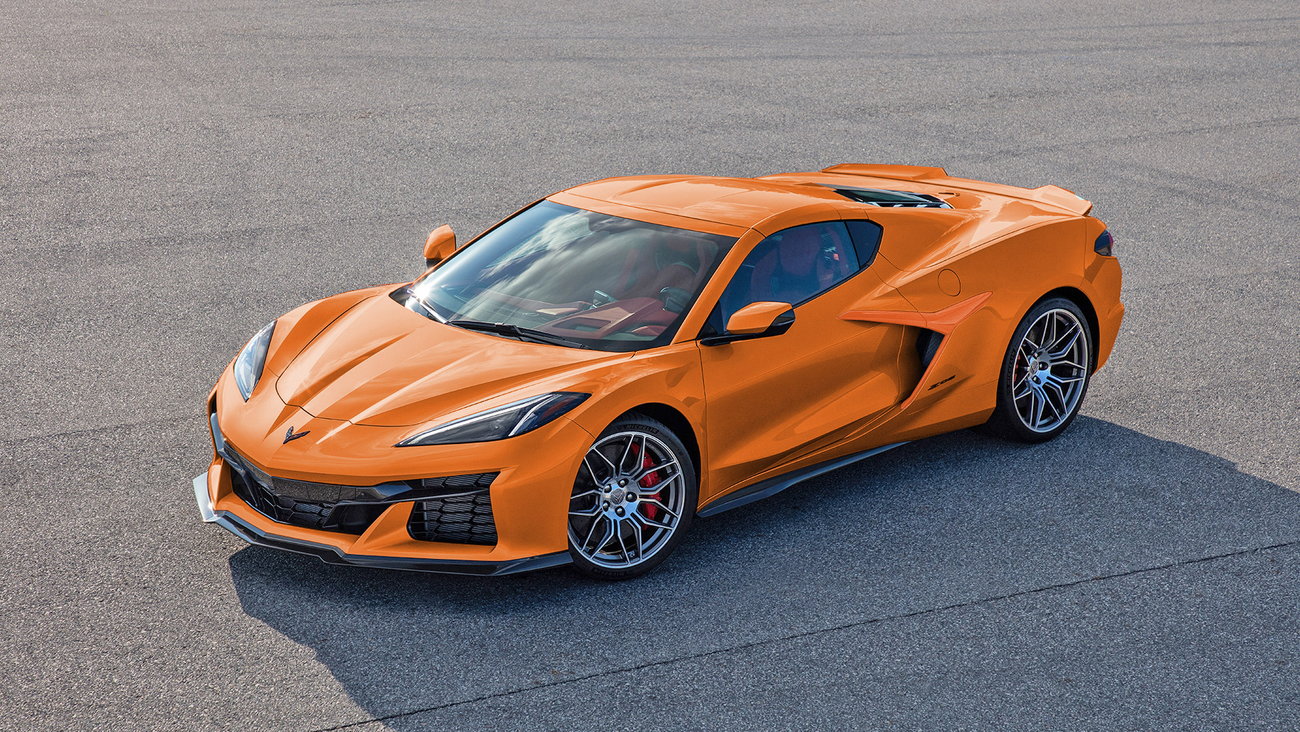 The change will go into effect the week of December 19, 2022, and may be added to the Build and Price Configurator at a later date. If the price for the Z06 model remains the same as the Stingray, EFY will add an additional $995 to the order.

What is an RPO code?

RPO stands for "Regular Production Option" and it refers to a code assigned to specific options or features that a vehicle can be equipped with. These codes can be found on the build sheet or trim tag of a vehicle, and they allow manufacturers to track which options and features are most popular among buyers. On the C8 Corvette, RPO codes can be used to determine the specific options and features that a particular vehicle is equipped with, such as the type of engine, transmission, exterior paint color, and interior trim.

Doug DeMuro, a well-known YouTube car reviewer, recently got the chance to test drive the 2023 Chevy Corvette Z06 and he is absolutely loving it!

With a naturally aspirated V8 engine producing a whopping 670 horsepower, this car can do 0-60 in under three seconds, making it one of the most thrilling Corvettes ever made. Not only is it a beast on the road, but the Z06 also has a beautiful exhaust note thanks to its flat plane crank V8 engine. And, even though it's a high-performance car, the price tag for the Z06 is surprisingly reasonable (at least for now).

If you're a die-hard Corvette fan, you definitely don't want to miss out on this review from Doug DeMuro. Trust us, you'll be even more excited to get behind the wheel of a Z06 after hearing his thoughts on it.

"The Z06 is truly amazing. It has a naturally aspirated V8 with 670 horsepower, does 0-60 in under three seconds, and is surprisingly reasonable in price. This is the most thrilling Chevy Corvette ever made and it really is incredible." - Doug DeMuro

Cameron Rodgers, an Edmunds writer, recently shared his thoughts on the 2020 Chevrolet Corvette as part of a series on his favorite cars of 2022. Rodgers drove the Rapid Blue Corvette for four months and found it to be an "all-rounder" with excellent performance, comfortable ride, and rich materials in the cabin.

He particularly enjoyed the mid-mounted 6.2-liter V8 engine's ability to "rip and roar" when desired and the car's impressive handling and grip, as demonstrated by its 1.08 g on the skidpad.

Although he had some minor complaints about the steering and exhaust sound in certain driving modes, Rodgers overall praised the Corvette as a fantastic sports car that is also practical for daily use. He also expressed excitement for the rumored electrification of future higher-end models.

On December 15th, the 2023 Chevrolet Corvette Z06 was showcased in a live stream hosted by MyWay's Billy Konsoer and featuring Corvette engineers Jordan Lee and Dustin Gardner. The team highlighted the Z06's impressive 670HP hand-built LT6 5.5L engine, which can accelerate from 0-60 in just 2.6 seconds. In addition, Lee and Gardner shared insights on the importance of protecting certain key components within the engine, such as the bearings and crankshaft.

2022 was a banner year for ACS! We accomplished so much, from releasing new products and attending events to releasing a steady stream of content on our YouTube channel (22 videos!), and updated our Configurators. We also made a big push into international markets, shipping to 12 different countries around the world. And of course, we made sure to keep our fans informed with our monthly Corvette News Summary. As we look back on the year, we're proud of all that we've achieved and can't wait to see what 2023 has in store for us.

Thank you for joining us through the last twelve months! We hope you have enjoyed the ACS Corvette News Summary.

This month give us a preview of what's to come in 2023. We'll continue to bring you the most important news and updates on the Corvette brand.

If you're new to the CNS, be sure to sign up for our newsletter to receive future updates directly in your inbox. We look forward to sharing more news with you in the coming months.